CPU vs GPU Mining – Which One Should I Choose? 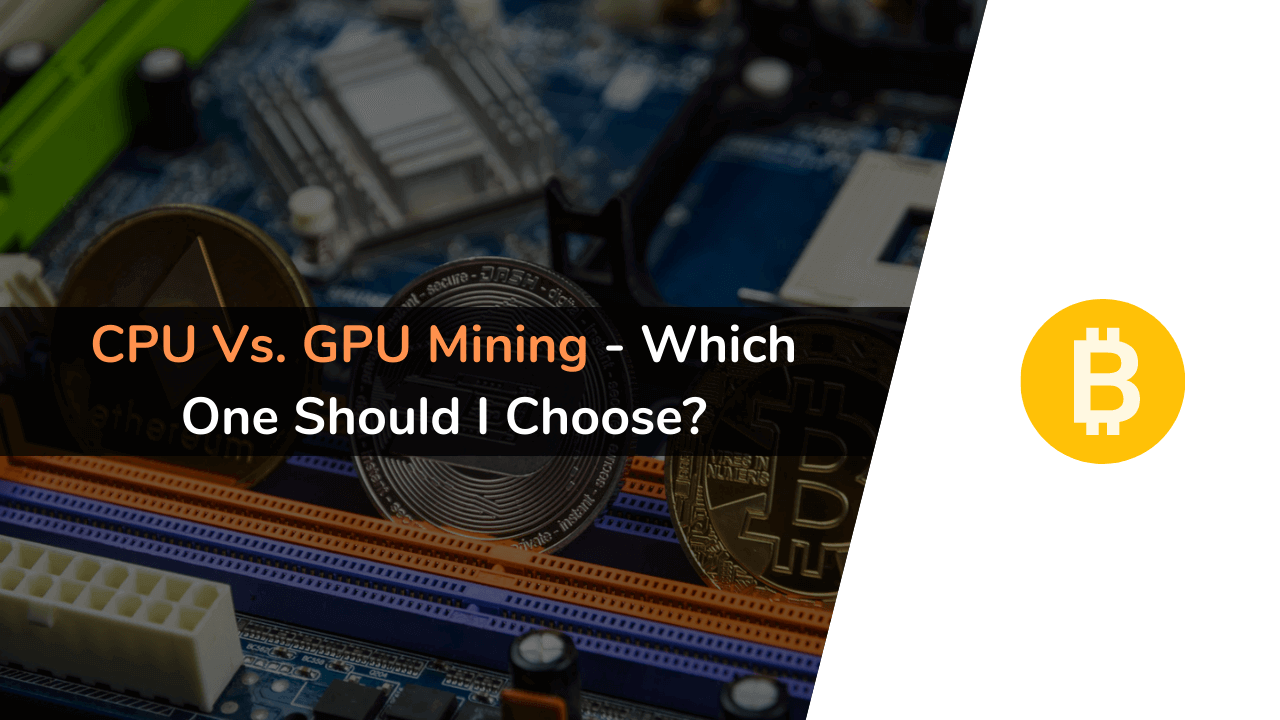 Are you thinking of starting Crypto mining but confused about whether you should go with CPU mining or GPU mining? If Yes, then this article is for you. This article has comprehensively explained everything you need to know about CPU and GPU mining, CPU Vs. GPU mining.

Cryptocurrency has been a hot topic for the past few years, but recently it has become much more trending. You must hear about it daily in the news, from someone else, or see it trending on social media. Many people are now choosing to put their capital in crypto for profitable investments, and it has surpassed all the other assets and investments in terms of return.

As cryptocurrencies become more popular, people want to get further involved by mining them on their own. The crypto coins can be mined with the help of high-end computers and rigs. At your convenience, as you must already be aware, the mining can be done in two ways, GPU mining, and CPU mining.

So for someone who is starting Crypto mining, it is obvious to get confused about whether you should go with CPU mining or GPU mining. In this article, to eliminate your confusion, I have comprehensively explained everything you need to know about CPU and GPU mining, CPU Vs. GPU mining.

Cryptocurrency mining, as you must already be aware of, involves the procedure of adding a transaction to the blockchain by securing and verifying it and further releasing the coin or currency. It needs a special mining rig and program, and the more powerful computer lets the miner compete with others.

For mining, the main objective is to solve a complex mathematical problem and get the reward as crypto coins. The blocks need to be added to the blockchain by the miners with proof of work or POW. This task requires a lot of computer power, energy, and enormous hardware to complete the heavy tasks. Every block is solved using a cryptographic hash function repeated at regular intervals.

Hash is a numerical value with a specific length whose purpose is to identify the data. The miners with the mining computer need to find the hash value less than the target, and the one who decodes the value first gets the reward. At the start, the mining was only carried out by cryptography professionals, but the increase in popularity led others to start mining.

Some mine through a single computer, whereas some set up a mining farm to mine the cryptocurrency continuously at a large scale. The mining setup needs to have a graphic card, processor, memory, and a cooling set up as the system generates a lot of heat for carrying out such heavy tasks.

The GPU and CPU mining differ in speed, energy efficiency, architecture, maintenance level, and many more. Let us look at all these aspects to understand which one is better.

And thus, when it comes to solving complex mathematical problems, GPU is faster than CPU. So, with GPU mining, you can solve more blocks. GPU rendering can be around a hundred times faster than CPU, depending on the quality of individual pieces of hardware.

When it comes to GPU vs CPU mining, one of the important factors of comparison is energy efficiency. With the mining process and its efficiency, the use of better hardware has become more accessible.

You will find most of the miners prefer GPU over CPU as it conserves more energy. Of course, GPU rigs cost quite a lot more than CPUs. But if you do it right, GPU won’t cost you the earth. Moreover, the energy efficiency and faster speed of GPUs eventually profit you.

When it comes to maintenance, GPU mining again overshadows CPU mining. Maintaining a GPU is much easier, and you can always upgrade it, and the whole process is straightforward. The most challenging part of upgrading a GPU is choosing the right one.

At the same time, CPU maintenance is very hectic as it is not upgraded. So it becomes very crucial that your computer is not getting damaged. That is why most miners do not rely on CPU mining.

GPU mining is much easier than CPU mining; it does not put any more stress on the computer than it usually does. But with CPU mining, things are just the opposite.

When you provide more tasks to your CPU, it works harder. But the thing is that the more complex work your computer does, the hotter it becomes. Thus excessive heating always poses the risk of crashing. This could even damage your computer, and as we already said, you can not upgrade the CPU. Therefore the whole CPU mining becomes quite tricky.

Why Some People Still Go With CPU Mining?

So, we have seen the advantages of GPU mining over CPU mining. But why do some people still mine with CPU instead of GPU? You will be surprised to know that many people mine only with CPU. Moreover, there are some coins that can only be mined through the CPU, like Reicoin.

The next factor that has made CPU mining still a thing is that it is available for everyone with a computer. You can start mining with the CPU you already have and do not have to spend a lot of money on it.

If you are a beginner, it is best for you to start with CPU mining, and you do not have to spend any extra money. It will also let you try cryptocurrency mining before jumping on the next step and making big purchases.

While there are many who mine cryptocurrencies with GPU, some still prefer CPU mining. Apart from these, you can find many miners who use both GPU and CPU for mining. Using GPU in addition to CPU mining provides some additional benefits.

What Other Types of Cryptocurrency Mining Are There?

GPU and CPU are not the only options for mining. There are other types of cryptocurrency mining, but they are not as accessible or popularized as these two types. So, let us take a quick glance at these types too.

Application Specific Integrated Circuit (ASIC) is a microchip designed specifically for transmission protocol or handheld computing devices. They are used for various purposes, and one of them is crypto mining.

You can either buy a pre-built one or custom manufacture/build it. The ASIC is an integrated circuit designed for cryptocurrency mining, and they are efficient and mine more coins than any other platform.

FPGA has logic blocks and a hierarchy of reconnects that are reconfigured and wired together. They can be used to perform long and complex combinational functions. The FPGA mining mines proof-of-work effectively and very quickly, and it is much faster than CPU mining but less than ASIC mining.

The FPGA is used explicitly for mining Bitcoins.

In this article, we have covered all about GPU vs. CPU mining, and we have done a complete comparative study between these two mining processes. If you still have some doubts, read the questions mentioned below.

1. Why Is The GPU Better Than The CPU For Mining?

Many miners prefer GPU over CPU for mining because of obvious reasons. Firstly, the high speed of the GPU can perform the hash calculation better and more quickly, and they can solve more blocks than CPUs at the same time.

GPU mining is much easier than CPU mining. If your GPU gets damaged, you can easily replace or upgrade it. But this is not the case with CPU. CPUs can not be upgraded and therefore need to be very careful while mining.

2. Is GPU Mining Faster Than CPU?

GPU mining offers several benefits over CPU mining. GPUs perform better in solving complicated mathematical problems, and they can perform a more significant number of blocks than the CPU.

With quality hardware components, GPUs can render at a hundred times faster speed than CPU. That is, GPU mining is the first choice of the minor. Of course, it costs more than CPU mining but at the same time generates more profit too.

3. Does CPU Matter For GPU Mining?

The CPU is one of the main components of the computer. But when it comes to mining, GPU is the top choice of miners.

CPU does not have much significance for GPU mining. Because we do not depend much on the CPU, it is always suggested to save money on it and buy a decent one.

CPU is an essential component of the computer, and many use it for mining. But one should not risk CPUs in mining. The mining process generates a lot of heat, which poses the risk of damaging your CPU.

You can not upgrade your CPU. Therefore to prevent your system from damaging, you need to have a high-end cooling system. The low-end CPUs get hotter quickly than mid-end CPUs. In this way, GPU mining becomes better than CPU mining.

So, in this article, we have seen the main difference between GPU and CPU mining in speed, energy, and maintenance. From the above discussion, it is obvious that GPU mining is much better than CPU mining.

The graphic card or series of graphic cards in your rig also make a difference. But overall, the GPU will deliver the most effective processing power. GPU has a much higher speed and conserves more power, and the coin mined by the CPU does not hold much power.

The CPU mining fails to compete with the higher processing of GPU mining. A GPU rig does not always have to cost a lot, and even if it does, the right and profitable mining method cover all the costs.

So, if all your doubts are cleared, you must have got an idea which one you should choose, GPU mining or CPU mining. We hope this article about CPU vs. GPU mining is helpful to you.

In the comment, let us know which mining method you will select and why after reading the article.