What is Power Limit Throttling & How to Fix This? 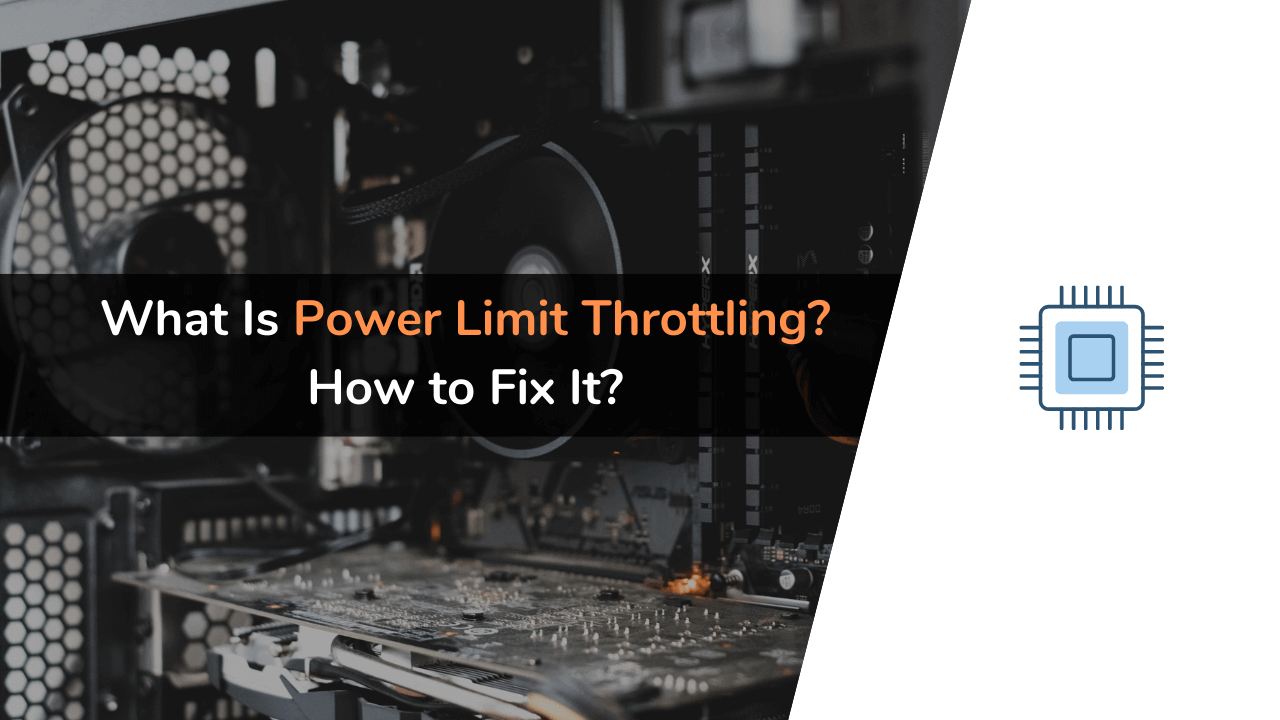 If you have received a notification in Windows about power limit throttling, then don’t worry; there is nothing to worry about. There is nothing wrong with your system, and this is how systems protect themselves.

What Is Power Limit Throttling?

The processors have two ways of thermal protection; one is auto-shutdown, and the other is power throttling. The cores of the systems have a default temperature, basically its safe temperature. When the temperature rises above the set limit, it can be a concerning situation.

So when the core of the system rises above the safe temperature, power limit throttling occurs. To break it, the core starts to reduce the power being used so that the temperature can fall back to the safe point.

The power limit throttling is nothing but a preventive measure to protect the systems from any further damage. If the conditions worsen and throttling cannot keep the temperature down, the system automatically shuts down. It is the case when it exceeds the maximum temperature.

This usually happens if you have thermal solution failure, incorrect assembly, or overclocking. The throttle temperature usually differs by the BIOS setting and the processor. And of course, it is a matter to look into as it indicates that your system is not working correctly and is not stable.

Power throttling may occur when your system does not have a proper cooling system. When the cooling system is not adequate, your PC won’t maintain the core temperature, and it will only increase; thus, power throttling occurs. Knowing the cause is essential to try the proper method to fix the issue.

How Power Limit Throttling is Different from Thermal Throttling?

Power throttling is not the same as thermal throttling, and many get confused between these two. Remember that the power usage is never constant as it is always under some stress. The power limit throttling is a processor feature that lowers the power consumption to reduce the temperature back to the safe limit.

How Do I Fix Power Limit Throttling?

There are numerous methods to fix the power limit throttling. The fundamental way to fix throttling is to keep the system cool. You can do this by not overworking the system. This may sound easy and simple, but it is not easily done in practice. Even while doing basic activities, the computer gets hot.

So, to fix power limit throttling, we have mentioned many methods. As per the cause, you can choose the most appropriate method.

1. Make Sure Your Computer Has Enough Room To Expel Heat:

While facing power limit throttling, the first thing to check is your computer system setup. It will help ensure that the airflow is not restricted by anything like a wall, mat, or anything else. If you are using the laptop, then the cushion on which you have kept your laptop can also restrict the airflow.

This acts as blockage and does not allow the proper airflow, which is important to regulate the system’s temperature. Hence, you should ensure that your computer has enough room to expel heat from all sides.

2. Keep Your Computer Away From Vents, Windows, And Other Producers Of Heat:

If your computer system is kept in a warm area, then the power limit throttling can occur. Ensure that your system is not exposed to direct sunlight or high-temperature areas. It can increase the temperature of the system and cause power throttling.

That is why it is advised to keep your system away from vents, windows, and other areas that can produce heat. So, from these two methods, it is clear that the positioning and setup of the system play a crucial role; you can not keep it anywhere.

The next method to fix the power throttling is to check your cooling system. It may not cool your system effectively, which leads to an increase in the temperature. The basic reason your cooling system may not be working is the dust on the fans and vent.

When the dust accumulates on the fans and vent, it restricts the fan’s motion. It further blocks the flow of temperature out of the system. All this eventually leads to power throttling. Therefore it is advised to clean the fans and vent regularly. Use a can of air duster to clean the vent and fan. Never make use of the vacuum; it can cause damage.

The CPU fans are one of the essential parts to maintain the system’s temperature, and it is because the CPU contributes a lot in increasing the temperature of the system. Generally, CPUs come with lower-end fans, sufficient to regulate the temperature.

If it is not working for you and facing power throttling, you need to upgrade your CPU and get high-end fans, and it fixes the power throttling effectively. I have personal experience; I am using a free fan that comes with a Ryzen 5 processor, but when I do gaming, my pc overheats.

But once I replaced a free fan with a high-end air cooling system, I still have not faced an overheating issue.

After upgrading the CPU fan, if the power throttling does not get fixed, you need to take it one step further by adding the case fan. The performance-enhancing memory and high-end graphic cards also contribute to the system’s heat, and that is why you need to control the temperature of your entire system along with the CPU.

Many gaming enthusiasts equip two fans in their system, one to draw in the cool air and the other to expel the hot air from the system. While adding the case fan, the intake and exhaust levels must be almost similar. If not, it can create dead air, which will increase the overheating.

In case you overclock your, then the heat will be generated more. The memory contributes to heat, and the temperature increases further while overclocking. This leads to power limit throttling.

Therefore to eliminate the dreaded dead spots of airflow, you need to add a memory cooling fan. You need to have a proper and high-level cooling system to fix power throttling.

In case you experience power throttling, then you must check whether your power supply fan is working correctly or not. In case it is not functioning, then you need to replace it.

You must think that an open case is the best way to maintain the system’s temperature by making enough space for the flow of heat. But it does exactly the opposite of it. The open case allows more debris and dust to accumulate on the fans and vent.

7. Consider Getting A Water Cooling Kit:

If you play high end-games or overclock your system regularly, then even the fastest fans cannot regulate the temperature of your system. For this, most gamers have a water cooling kit that helps reduce the temperature and keep the CPU cool, and it is one of the most effective methods to keep the system cool.

The pump cycles cold water to the CPU in tubes that are self-contained. It is an affordable and highly recommended method to fix power throttling.

8. Think Before You Overclock:

If all the above options don’t work much for you, you need to be conscious of the usage of your computer. Overclock is an effective way to maximize the performance of your system, and it pushes the capability of the system to its limit. But of course, it also emits a high amount of heat in doing so.

While overclocking, you should keep a regular check on the system’s temperature. If you notice something abrupt, you should immediately stop whatever you are doing and let your system cool.

There is no doubt that keeping your PC cool while working or gaming is quite difficult. But you should try to do all possible ways to keep its temperature around the safe limit.

This article has covered all about power limit throttling and ways to fix it. If you still have some doubts, read the questions mentioned below.

Power throttling is neither good nor bad, and it is just a precautionary alert message that your system provides you when it is not stable.

So you can think of power throttling as a fuse. By indicating the error, it protects the system from further damage.

As soon as you see the power throttling message, you should start working on making your system cool.

Overclocking is the method of increasing the clock rate and speed that enhances the performance of your system. By overclocking, you push your system to its absolute limit.

The overclocking, of course, generates more heat, and thus you need to have an excellent cooling system. Generally, games overclock their PC to play high-end games.

So to summarize, we can say that power throttling is a computer and laptop system feature. When the system’s temperature exceeds the safe limit, throttling occurs, reducing the power consumption to decrease the temperature.

There are various reasons why power limit throttling occurs. The basic reason is that either the power limit of your processor or the core voltage is set too low. The unavailability of a good and effective cooling system can also cause power throttling.

To fix power throttling, we have mentioned various methods. According to the cause of the throttling, you can try the most appropriate way to fix the issue. We hope this article about fixing power throttling on Windows is helpful to you.